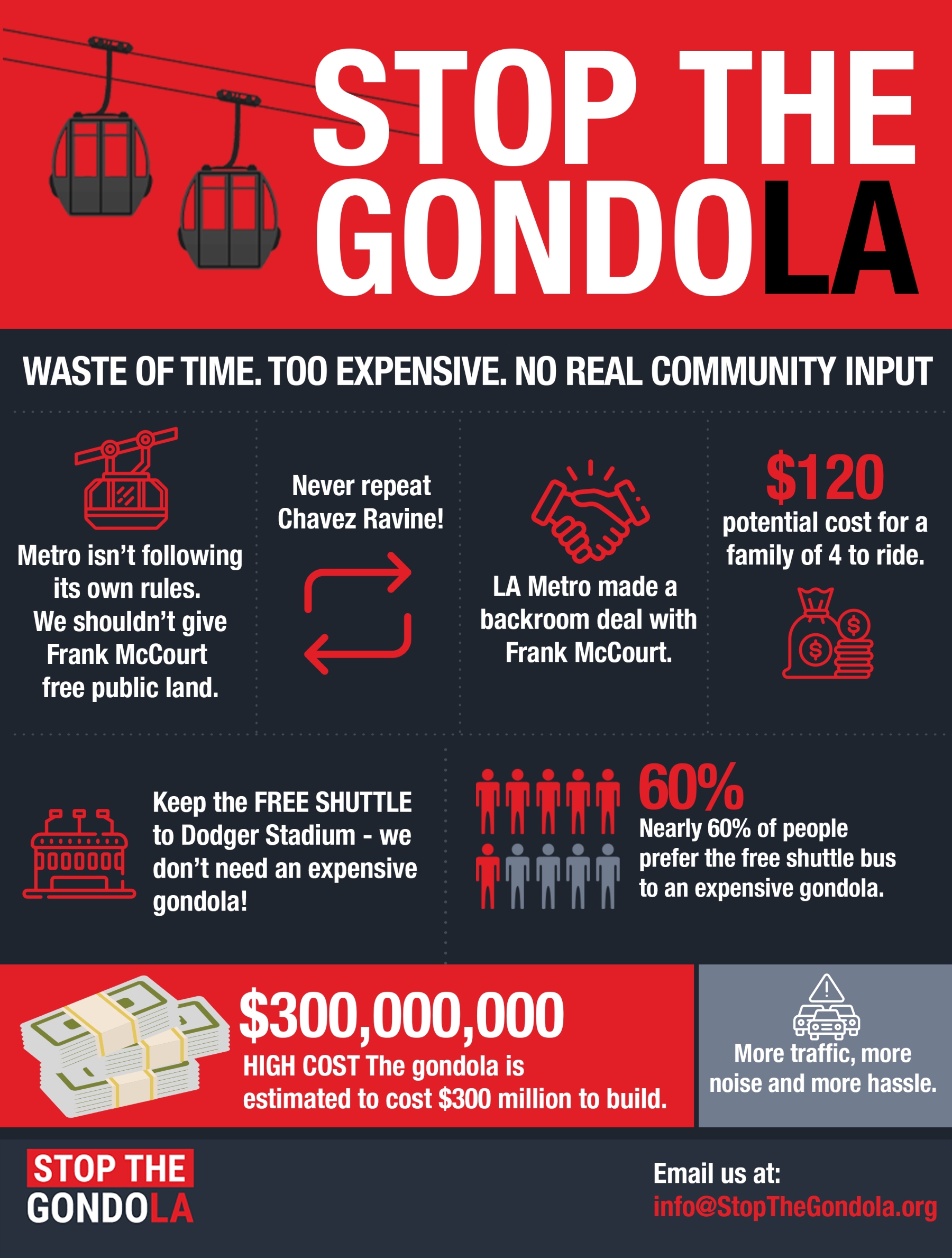 What is the gondola project?

If approved, the gondola will be built along a two-mile route and will involve the construction of huge towers on public land being gifted to Frank McCourt. Historic Union Station, Chinatown, the Elysian Heights neighborhoods, and the commuters on the Harbor/Pasadena Freeway will have cabins the size of semi-trucks flying over them. Construction of the gondola could also clog up traffic in the neighborhoods surrounding Dodger Stadium for years.

Why is Frank McCourt’s Gondola Project a bad proposal for a new transit option to Dodger Stadium?

Construction of the Gondola is estimated to cost $300 million. Metro has entered into an agreement with Frank McCourt behind closed doors, so we don’t know how he intends to finance the project, or how much the taxpayers are expected to contribute for things like ongoing maintenance and operations. What is Metro’s responsibility if there are cost overruns? Will taxpayers foot the bill or will there be an unfinished eyesore in LA’s historic neighborhoods?

Angelenos have different priorities than a gondola. They want safe and affordable public transportation, more affordable housing, and a solution to the homeless crisis. Our public officials should focus on those issues instead of wasting public resources on a gondola nobody wants. Besides, Metro already has a free shuttle bus to Dodger Stadium that nearly 60% of Angelenos prefer over an aerial tram.

Where is the project being built? What’s involved with construction?

The gondola will run from historic Union Station to Dodger Stadium, above Alameda Street, through Chinatown, the Los Angeles State Historic Park, over the Harbor/Pasadena Freeway and the neighborhoods surrounding Dodger Stadium.

Gigantic towers will be constructed along the two-mile route, and flying cabins the size of semi-trucks will be suspended over the surrounding neighborhoods and freeway. Construction could create significant traffic and safety issues for years.

Why haven’t we heard more about this project?

Community members have largely been shut out from the planning process. In fact, local residents did not ask for this project to be built in our neighborhood.

Why is this being built?

There is no need to build a gondola since there is already a free shuttle system that takes people to Dodger Stadium from Union Station. So why would a billionaire spend millions of dollars on a project that is not going to pay for itself?

Frank McCourt has expressed an interest in turning the Dodger Stadium parking lots into a retail area similar to Staples Center in downtown LA. — which would hurt local businesses, increase traffic congestion in the area, and make parking at Dodger Stadium even more difficult. By building a gondola, he would not only be finding ways to take customers to his retail center, but he would charge them upwards of $30 a ride to do so.

Will taxpayer dollars be used to finance this project?

Taxpayers will likely have to pay for this project in one way or another. Since the LA Metro Transportation Authority is sponsoring it, it becomes a public project meaning the taxpayers are ultimately liable for it. For similar projects in other cities, taxpayer dollars have been needed to pay for cost overruns, maintenance and daily operations. Frank McCourt nearly bankrupted the Dodgers, do we really believe that he will pay for every single dime and cover every cost of this unnecessary project?

No. Neither Frank McCourt Global nor LA ART have ever built an aerial tram system or any transportation project. To have an organization with no experience in this type of construction be given permission is unprecedented and completely against LA County rules.

Want to get involved?

It’s no accident that very few people know about this project. LA ART has engaged in limited community input likely hoping to get this gigantic project approved before anyone notices. But it’s not too late to stop this wasteful and unnecessary billionaire’s pet project!

Sign up to learn more and help stop this scam.

Thank you! Your submission has been received!
Oops! Something went wrong while submitting the form.